This spring, I fell in love with the Great British Baking Show: Masterclass on Netflix. After watching several seasons of the competition show, I was finally led to believe that I could accomplish some of the beautiful and mouth-watering baked goods I saw on the show. As one who tends to cut corners and mess up recipes (waiting for dough to rise is something I rarely did properly in the past), considering making bread is a big deal. I made Italian Florentine bread a few times before but that’s about it. This time, I was determined to wait the correct amount of time and really apply myself as I decided to make French baguettes and English muffins. I used both recipes as described on the show.

First, I wanted to gather and measure all my ingredients. This way, I would be ready as soon as I needed to add something in. This probably sounds very basic but it’s something I don’t do as much as I should. 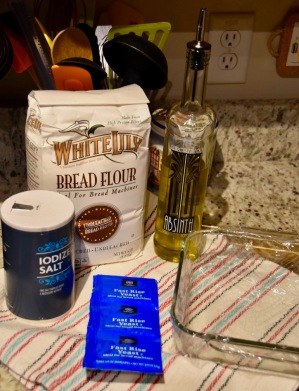 I started off with the baguette dough, which involved my favorite toy: the Kitchen-Aid stand mixer. How I loved to watch the dough form in there. It’s the little things in life, folks. 🙂

The English muffins, on the other hand, had to be kneaded by hand. Usually, when I handle dough, it’s sticky and frustrating, and I end up with more dough stuck to my hands than on my working surface. Whenever I watch a baking show and see them knead and manipulate the dough like it’s so easy, I get frustrated and my inner toddler shouts “It’s not fair!“. Well, this time, I was able to handle the dough like a normal person and I really enjoyed kneading it. Does it count as a daily workout? Because it felt like it by the end of it. I must have done a fairly good job as the dough rose really well and more than doubled in size. 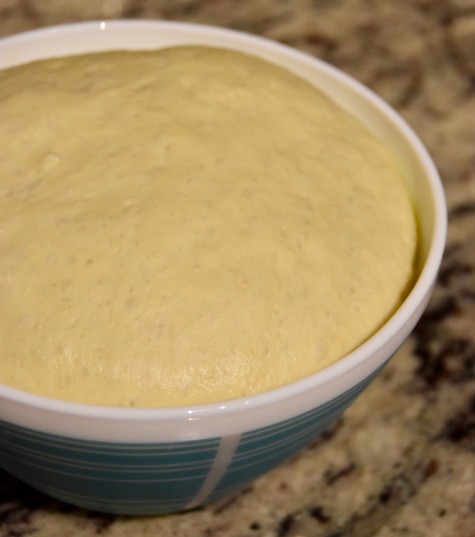 Shaping my baguettes didn’t go great. As soon as I touched the dough, it deflated. I might need to call Paul Hollywood and ask him what went wrong. If only I had his mobile number, it would make my life much easier. 🙂 Since I was worried about messing up the dough, I didn’t shape it much and the resting dough looked a bit wonky. It wasn’t pretty but I hoped it would at least end up tasting right. That’s what really matters anyway, right?

The English muffins were much easier to shape. I used a large round cookie cutter and made 8 muffins. I was already proud and they weren’t even cooked yet! 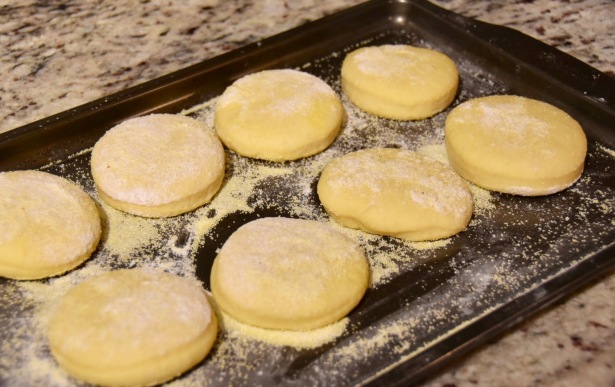 Now for the terrifying part. To bake the baguettes, you are supposed to have a roasting tray filling with boiling water to create steam in the oven while they bake. I don’t have a roasting tray so I used a large Pyrex baking dish instead. As I was pouring the water in, the dish exploded into a million pieces! My heart stopped from the noise it made and, for a second, I wasn’t even sure what happened. It took me a couple fo minutes to catch my breath and get my heart to beat at a regular pace again. I figured from the time it would take to clean it up, my resting baguettes would get messed up. I frantically texted my husband, completely discouraged. He suggested baking the baguettes and waiting to clean the glass mess after since the glass didn’t touch the baguette dough. I’m so glad I did because the baguettes turned out pretty well. While they cooled, I cleaned every little piece of glass out of the oven. That part sucked but, at least, I knew I’d be comforted by eating a delicious baguette later on.

The resulting baguettes didn’t look as perfect as the ones you’d buy in a French bakery but they smelled darned good, they had the hard crust I was looking for, and were fairly airy on the inside. Of course, my sous-chef Fattie-The-Large-Cat had to give her  sniff of approval…despite not being allowed to touch the bread. 🙂 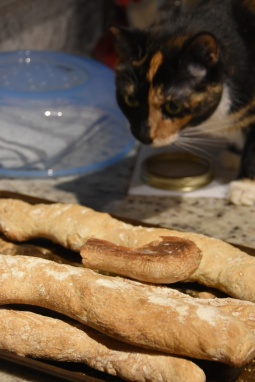 The English muffins were much easier to cook. I cooked them on a hot cast-iron plate. They looked just right and I was so proud!

So dinner that night was carb-licious! Baguette with fromage d’Affinois and maple jelly, and an English muffin with strawberry preserves. 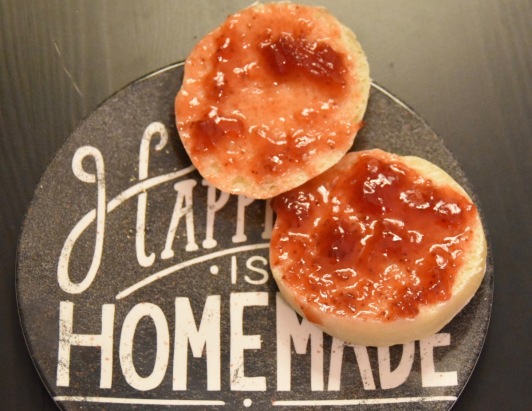 Overall, I’m really proud to have followed both recipes all the way through. Despite my explosive misadventure, the baked goods turned out pretty well and I had a wonderful time playing around in the kitchen, making delicious goodies. Now I can’t wait to decide what my next challenge will be…I’m thinking puff pastry. What do you think? 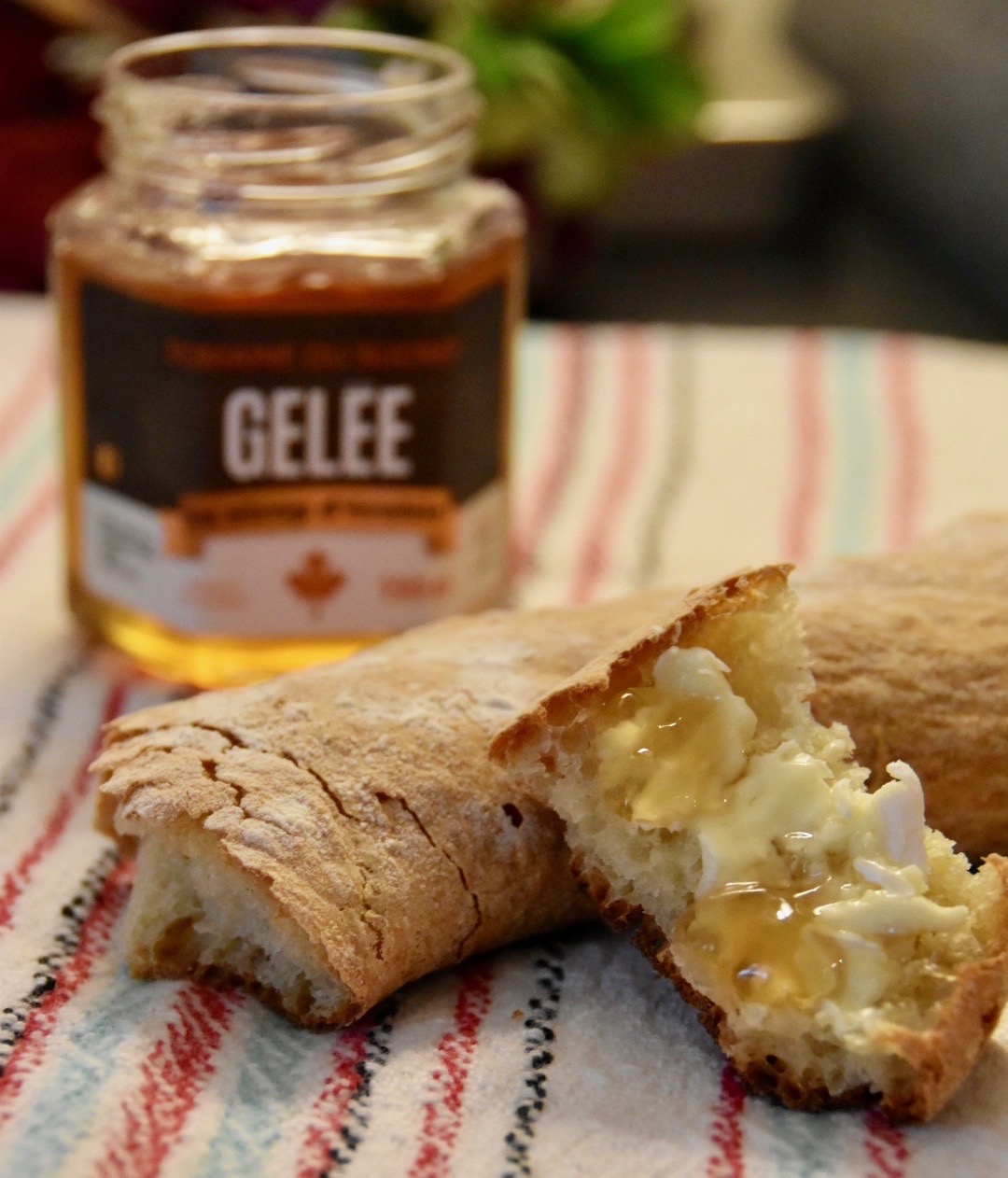 1 thought on “Baking Day And The Accidental Explosion”