My husband and I have a very bad tendency to always want to go out on the weekends. Since I’ve been trying to eat better after Cath’s departure, I couldn’t afford (health-wise) a scrumptious meal out. I figured a great dinner at home, as indulgent as it may be, would still be healthier since I would know exactly what was in it and I could control the portions better. So after browsing through the many recipes I’ve been wanting to try on Pinterest, I settled on crab cakes and crême brûlée. Jeff bought me a small blow torch for my birthday and I hadn’t had a chance to try it yet. This was the perfect occasion.

Main dish: Crab cakes with homemade mayo and a side salad

For the crab cakes, I used a recipe I found on How Sweet It Is. The recipe was super simple. It only took a few minutes to make. The biggest challenge was my cats who desperately wanted to know what that divine crab smell was.

I wanted to make a homemade mayo to use with the crab cakes. I followed the recipe from Fast Paleo. I did use my immersion blender instead of whisking for 8 minutes. What a breeze. The only hurdle (which could have been avoided if I paid attention to the comment section) was the very strong olive oil flavor. In my opinion, I could have use half as much olive oil. To compensate, I added random spices until it tasted good enough (paprika, salt, garlic powder, Old Bay seasoning).

The salad was super simple. Originally, I wanted to replicate a beet and goat cheese salad we had tried at a restaurant but Jeff said he wasn’t in the mood for beets and suggested using pineapple instead. After giving him my best annoyed face, I agreed and the result was really tasty. The simple salad was spring mix, pineapple pieces, little balls of herbed goat cheese and a simple homemade vinaigrette (olive oil, apple cider vinegar, salt & pepper). 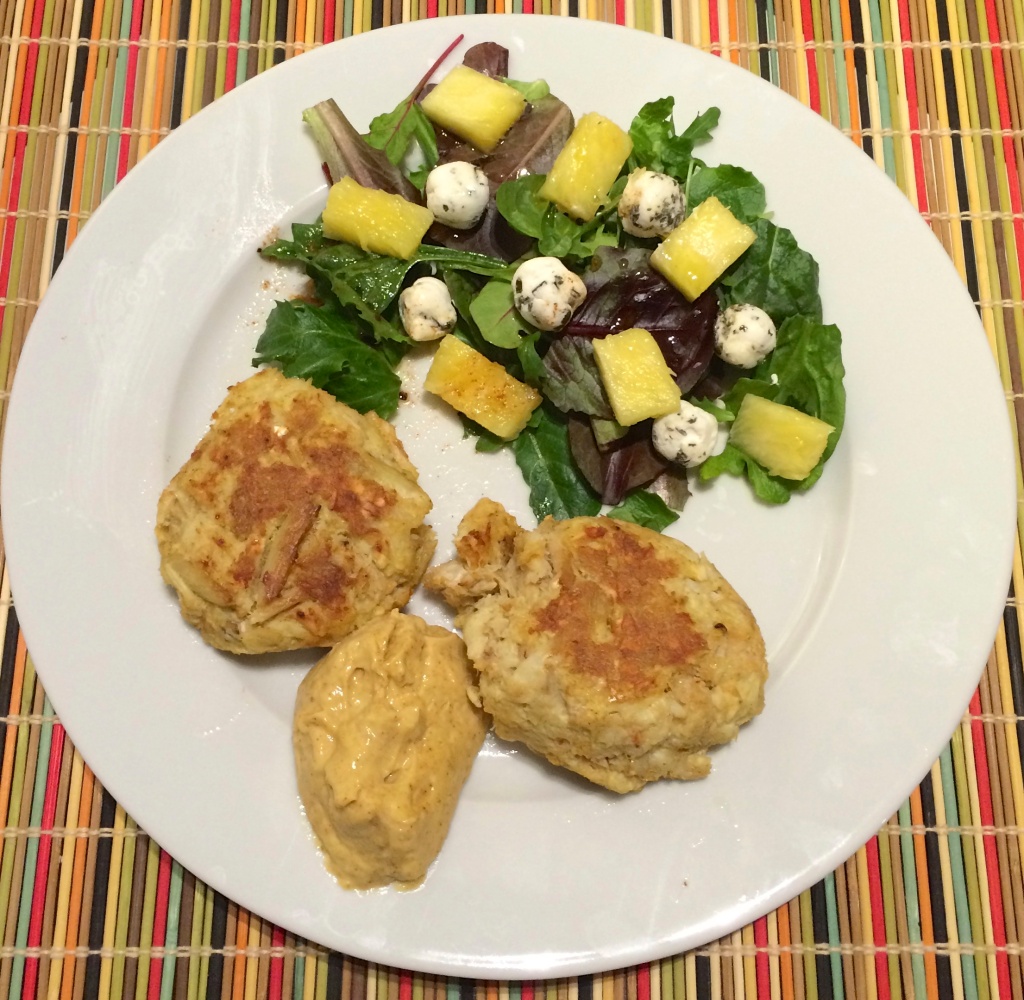 I was so excited to try out my new blow torch. I found a crème brûlée recipe that looked easy enough and went for it. I used the Chef in Training recipe. Honestly, it’s really easy to make but it does take time as you need to bake it for 45 minutes and then it needs to be in the fridge for at least 2 hours. Using the blow torch was fun and the result was so so tasty. Jeff finished his before I finished mine, which says a lot since he’s not usually big on desserts and rarely finishes one.

I know it sounds like a “duh!” statement but last night was yet another reminder of how much I like to be in the kitchen. I love eating out so much that it’s easy to forget that we can make pretty tasty stuff ourselves. I managed to cook two things that we very often order when we go out to dinner, and it tasted pretty darn close to restaurant level. Must. Remember. To. Cook. More.