I’ve been surprisingly productive in the kitchen lately. It could be because the weather is getting better (in my standards), or that cooking is more fun than schoolwork. Whatever the reason is, I am very happy with the results! I spent all of last week reminding myself that if I finished my school assignments early enough, I would be able to make pesto over the weekend.Well, my plans were slightly modified when I ended up spending over two hours on Saturday afternoon at Marshall’s, just browsing through clothes and house accessories…mostly kitchen accessories. After the first few weeks of school work and reading, I think that’s really the break my brain needed. So, needless to say, most of the pesto-making was rescheduled to Sunday.

I woke up on Sunday, ready to get down to business. First, I ran to the dollar store to buy a bunch of ice cube trays. A few months ago, I saw on Pinterest the idea of freezing pesto in ice cube trays so you’d have clear portions ready to use. I thought it was a brilliant idea! I also stopped by the grocery store for the basic ingredients I needed: parmesan (I don’t usually get the already shredded stuff but I wasn’t willing to spend half of my day doing that, so admittedly I cheated), sunflower seeds (just as good as pine nuts in my mind, and way cheaper), and olive oil. I got back home, put my pretty apron on and went outside to fill up my large pot with basil. Now, I should say that I grew a basil plant all summer and my tiny plant quickly turned into a ginormous bush of basil! I knew there would be a lot to make but I didn’t fully realize until I cut the first few branches!

Exhibit A: My evergrowing basil plant. This picture was taken a few weeks ago so it was actually bigger last weekend! 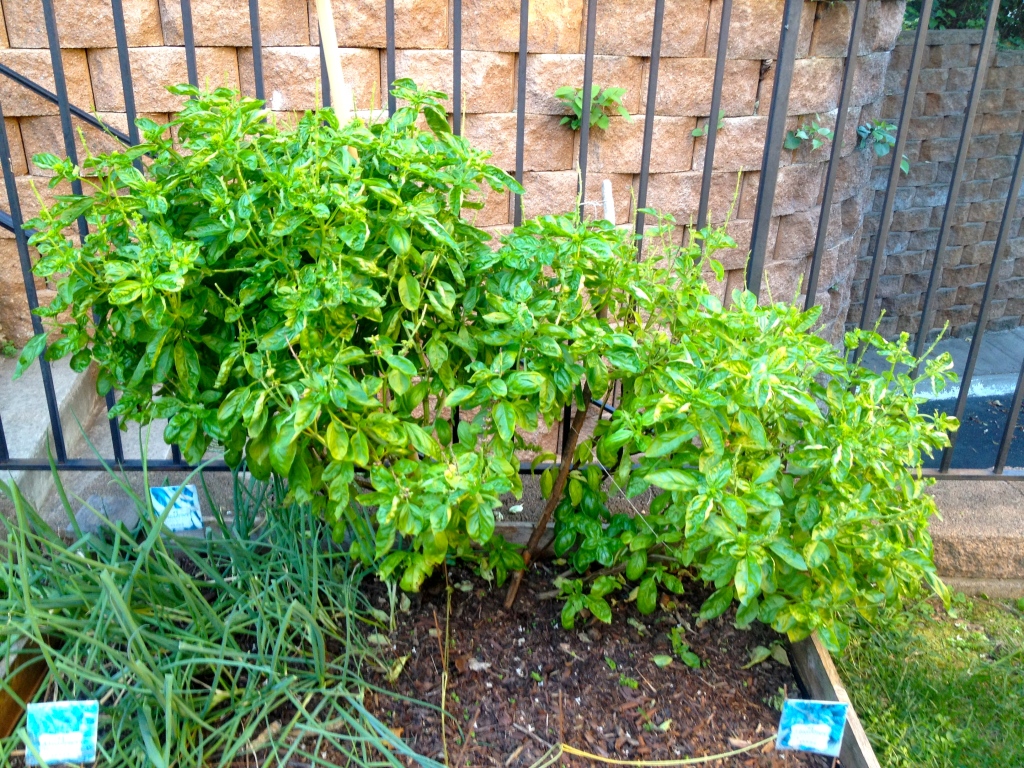 Exhibit B: This was after my first trip to the basil bush. It already felt like a lot but that didn’t even cover 1/6 of the bush!

All in all, the whole experience of making pesto is super easy. Throw everything in the food processor and adjust the quantities of ingredients as you go (and taste a lot! :)). Really, the annoying thing about it was that my little food processor (never felt small before but, in this case, I would have used an industrial one!) could only make so much at a time. Which meant, break leaves off branches, clean the leaves (I used the salad spinner), fill the food processor with everything, and REPEAT again and again and again.

Exhibit C: My pesto corner. What you can’t see is my laptop on the other side of the sink, playing Scrubs, Dawson’s Creek, and all other sorts of funny or cheesy Netflix goodness all day to keep me entertained during this painfully long process.

I also kept waiting to have more pesto in my big bowl before filling up the ice cube trays. It was pretty time consuming to fill them up so I wanted to do most of it at once. That way, also, I could mix together the different batches of pesto. This was a blessing in disguise as it allowed me to mix together batches with too much olive oil or sea salt with the ones that weren’t seasoned well enough. It all balanced itself out in the end.

Exhibit D: Putting the pesto in the ice cube trays was a lot messier than I expected! And yes, despite the fact that there are four different utensils in the bowl, I ended up only using my (clean) fingers!

Now I’d love to give you my recipe for pesto but I don’t know that there really is one. The ingredients always stay the same though: basil, olive oil, Parmesan cheese (Get the already shredded stuff if you’re making a lot, I won’t tell on you!), sunflower seeds (or pine nuts or other nuts of your choice, but I went for cheap), salt and pepper. That’s really all there is to it. The only thing I’d suggest is to start with less flavor, taste, and add what you want. I always tend to put a lot of everything on the first batch and too often end up with a oily salty mess. So, learn from my mistakes so you don’t have to go through the same issues! 🙂

At the end of the day, I was exhausted and couldn’t bear the smell of basil anymore. But I ended up with 84 pesto cubes and I am so very excited about it! Yesterday, I took them out of the ice cube trays, and into freezer bags to minimize the space they would take in the freezer. Now, whenever I make pasta (or anything else that could be seasoned with pesto), I’ll just grab a cube out my freezer bag! In the future, I’d probably get myself a buddy to help me get the leaves off the branches as it really was the most time-consuming task, but all in all, I think that my first attempt at big-batch-pesto-making was a success!