As I mentioned in my last few posts, my husband and I decided to try out the Paleo diet. Although I was sad to put away some of my favorite ingredients (flours, sugars, beans, rice, etc.), I must say that it really hasn’t been that difficult so far! This is a quick post to show some of the meals we have enjoyed so far.

In Quebec, we eat “fondue chinoise” very regularly. The meat is cooked in a beef broth, seasoned with onions, herbs, and occasionally some wine as well. The meat we have in Quebec is super thin sliced and I haven’t found anything like it here yet. Last time I went to Quebec, I bought back some dry packages of broth and we finally used one of them on Saturday night. Jeff cut up some flank steak as thin as he could and I also prepared some mushrooms (my favorite thing to put in the broth) and some broccoli, requested by the hubby. I don’t plan to use the powder mixture again as I would much rather make something similar from scratch, without the icky chemicals. I made an exception to make sure Jeff would taste the “original” flavor first. This meal is not only fun but it is also super Paleo friendly as you pick what you’ll use and can adapt it to your diet. Chicken and shrimp could also be cooked in the broth but beef is a personal favorite.

(Sorry for the half-eaten picture…I was hungry and forgot to take a photo before digging in…oops!) On Sunday night, I made a pork tenderloin, marinated with garlic, thyme and rosemary. I also made a side of mashed cauliflower and carrots, seasoned with a tiny bit of butter, sea salt, thyme and green onions.The pork was fabulous and I personally liked the cauliflower experiment but, sadly, my husband wasn’t a big fan. Oh well, at least we tried something new!

This was an experiment with the Paleo bread I made over the weekend. I made an egg-avocado mixture to put on top (hard-boiled eggs mushed with fresh avocado, salt, pepper, cumin and a dash of fresh lemon juice). Add a slice of tomato and some spinach and you get a healthy and satisfying lunch! Really, I should have only eaten half of it but I really liked it! 🙂 The following day (no pictures, sorry, I was REALLY hungry) I did the same thing but rolled it in a big lettuce leaf instead of doing the open-face sandwich.

This orange chicken recipe was fabulous. It would have been even better if I didn’t cut myself while taking/breaking a wine glass out of the dishwasher. My little incident (I survived but I swear I have the worst luck) made me forget about the different things cooking on the stove for a moment so most of the sauce cooked off (more than I wanted it to) and the broccoli was really mushy after being steamed for way too long. But all in all, this was still very tasty and could easily be adjusted to make it even easier and faster (although it wouldn’t be quite as perfect, orange juice could totally replace the hand-squeezed juice). I have been looking for a saucy chicken dish for a while as this is usually what my husband and I are craving when we order Chinese food. This could certainly become our to-go dish from now on.

Over the weekend, my husband and I were looking for a new fish to try. Although we usually favor fresh fish, we tend to forget about it and waste it instead of using it immediately. This is why I turned to the frozen section. I wanted some fish to keep in the freezer to have around whenever we’d feel like having fish. I decided to try out some orange roughy. I had never heard of it before so it was a random gamble. I baked it with a little bit of salt, pepper, Hungarian paprika and garlic flowers. I didn’t realize the difference it would make but instead of greasing the baking dish with olive oil, I used butter and boy did that little touch of butter go a long way in flavoring the fish! I do know that butter isn’t recommended in the Paleo diet but, hey, it was only a tiny bit and it made quite an impact! It turned out to be a mild fish, which is always a good thing for me. As a side, I simply sautéed the asparagus with garlic and a dash of coconut oil, and voilà! 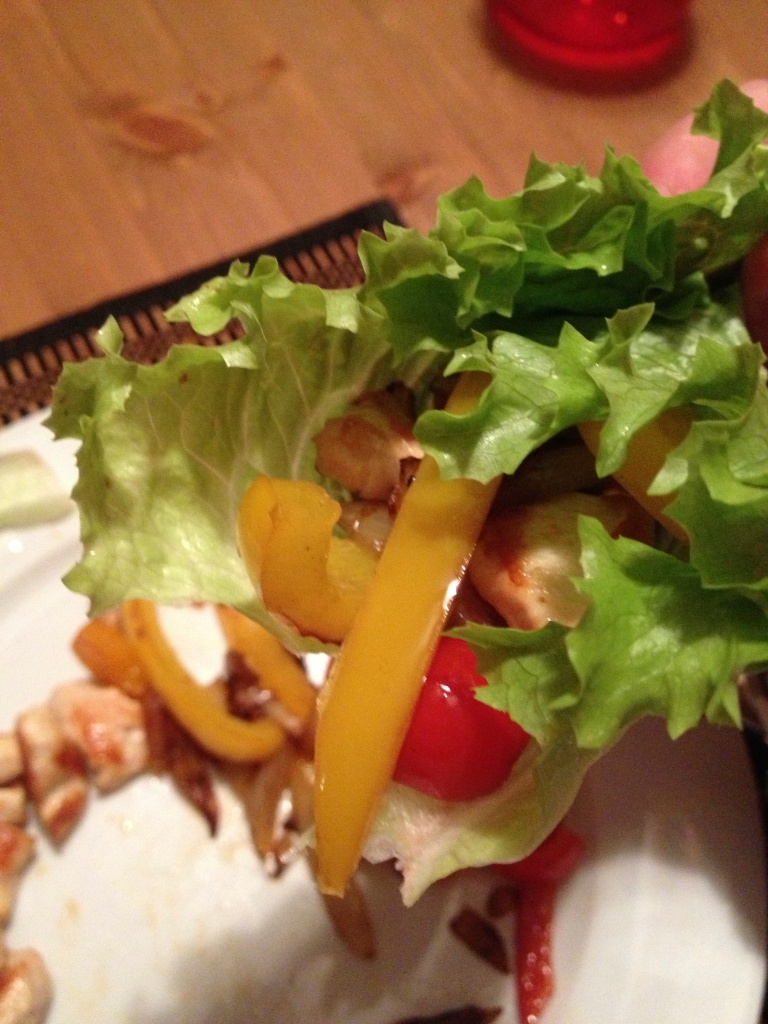 Tonight, my husband was out so I knew I wanted to cook bell peppers! Hah! I cooked a chicken breast in one pan and a mix of onions and bell peppers (orange, yellow and red) in another. I was planning on simply eating it in a plate but after the first bite, it tasted so much like fajitas that I had to roll it in something. Ha!Ha! Of course, tortillas are out of the question so I grabbed a couple lettuce leaves and rolled it all up. It was perfect! I should also mentioned that I didn’t put any seasoning (not even salt or pepper) on neither the veggies nor the chicken. It still tasted amazing which was a good reminder that it is good to just enjoy the natural flavors sometimes. Seasoning isn’t always necessary after all!

So this is our progress so far. We’re making baby steps and there is some occasional cheating but even when we change something, we try out best to either modify our cheating to make it as okay as possible or to minimize it as much as we can. We’ll have to see what we come up with next… 🙂

4 thoughts on “A Look at Our First Paleo Meals”