For the last few weeks, I have been working at a preschool summer camp. After 3 weeks talking about the Olympic Games (a subject very hard to follow, I must say), we decided to talk about science. It was time to touch, test, observe and learn about the different things surrounding us. Although we had no specific plan to incorporate food (we only have 3 weeks so we had to pick and choose the right activities), I realized that we did a lot of tasting with the children and they always love it. So today, I won’t be telling you about a new recipe I tried. Instead, I’ll describe some activities we did that involved food and that the kids really liked. We did it with 10-12 children but all of them could be done at home too.

The Stages of Corn 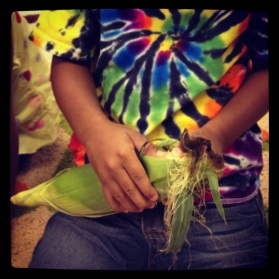 One of the first activities we did with the children was to plant two seeds: corn and green beans. While we’re waiting for them to grow, we decided to talk about the different stages in a plant’s life. As we planted a corn seed already, we decided to stick to that plant. We talked about planting the seed, what the corn plant looked like, how it was picked, what are the different ways to eat and cook fresh corn and, finally, the best part: popcorn! The children were encouraged to touch and peel a fresh ear of corn and then they got a taste of uncooked corn kernels. Concerning the popcorn, I first gave them the microwaveable bag (before cooking it) and asked them to touch it and guess what it could be. Then I put the bag in the microwave oven and asked them to listen for clues of what it could be. Of course, most of them guessed it very quickly but they were still very happy to listen to the popping sounds. Once it had cooled down, we tasted the popcorn and compared it to the fresh kernels (texture, taste, etc.). After all our tastings and discussions, I gave the children 4 different pictures (corn seed, plant, ear of corn, popcorn) and asked them to place them in the right sequence.
Blue Celery

We ended last week on a

very colorful note. After reading about it online, I decided to try the blue celery experiment with the children. The idea is simple: you put a branch of celery (one that has leaves) in a jar or glass of colored water (food coloring), and wait for several hours, or days if possible. The celery, or at least the leaves, will turn blue. This is a great way to explain to the children how plants drink, and therefore, why we should always water the bottom of a plant in the garden, rather than the leaves (we have a garden at school so it was very convenient to compare the situations). I had prepared a branch the night before to make sure they would see the result without having to wait for several hours. The kids were in teams of two and each team had to pour water in a glass, add food coloring, and then add the celery branch. I gave them the tiny branches in the middle of the celery in hope that it would absorb the water faster, which it did! After showing them my overnight blue celery, I offered them to taste it and see if it tasted differently from regular green celery. Obviously, the taste was the same but they were all very excited to taste a piece of blue celery! Then, we used extra celery branches to paint on a piece of paper. Because it’s always fun to paint with something other than a paintbrush! Some children used the leaves to paint, others preferred making U’s with the harder end. It really wasn’t about the painted result but more about experimenting with a new painting medium.

Our latest taste activity was yesterday. We talked about the difference between fresh and salt water. We talked about seas, rivers, etc. We showed them the egg experiment. In fresh water, the egg was sinking but when we added a lot of salt, the egg started floating. We compared it to the Dead Sea and how people can float in it because of how much salt there is in the water. This was interesting but we thought it would be even better to let them taste the difference. We made a pitcher of water, added a lot of salt, and gave them all a little cup and gave them all a tiny taste (there was only enough for a sip as we didn’t want to let them drink too much salt). We followed this by an illustrated class survey to know who liked it and who didn’t. We followed this by another taste test: coarse sea salt. We put a small rock of sea salt in each child’s hand and asked them to taste it. We did a similar survey for the sea salt as well. The results: half of the friends liked the salt water but the majority of them enjoyed the sea salt.
So none of these activities were really about cooking (well, except the popcorn!) but I just thought it was interesting to realize all the cool things you can do with your children, just by thinking outside the box a bit! Food is a major part of a child’s life. This is definitely an important subject to me. Children who spend a lot of time learning about, manipulating, and experimenting with food are more likely to care and be interested in what’s in their plate.

**Note: I wanted to use the pictures I took in the classroom but didn’t want to show the children’s faces for their own safety. This is why you won’t get to see the very excited faces but feel free to imagine what they would be like. 😉