This is definitely my favorite time of the year at our local produce market. So many fruits and vegetables are in season, I feel like my head will explode every time I enter the place! Of course, I have a few favorites that I buy every week such as strawberries, blueberries, cucumbers, tomatoes, and corn. I also like to look at some produce that I’m not really used to. As they are local and in season, most are fairly cheap, which is perfect to experiment! This week, I found eight-ball zucchini. I knew about regular zucchini but I had never heard of the ones shaped like mini-pumpkins. Apparently (according to a very quick Google search), they mostly grow in Mexico and they really aren’t as commonly grown here (please correct me if I’m wrong). In any case, as much as I am not the biggest fan of zucchini, I couldn’t resist the cute shape so I grabbed two and decided to find a way to stuff them.

Unfortunately, my cooking experiment was delayed for several days and by the time I got to it, one of the zucchinis had started rotting. I’m not going to lie, I was pretty annoyed but it was too late to go get an extra one at the store (and I just didn’t feel like leaving the house again) so I just dealt with it. I figured I would still use the good one. I started by emptying it. I put “the inside” in a big mixing bowl. I also used read kidney beans that I had soaked overnight and cooked the night before. Everything else was based on what I found in the fridge. I was a little bit scared of what it might turn into but it was actually pretty tasty. I went a little heavy on the garlic for my taste but my husband said he didn’t mind it. As I only had one zucchini to stuff, I used two French onion soup bowls as well. I was glad I did two as the little zucchini didn’t provide much stuffing for a dinner meal. Alright, enough blabbering, here’s the recipe! 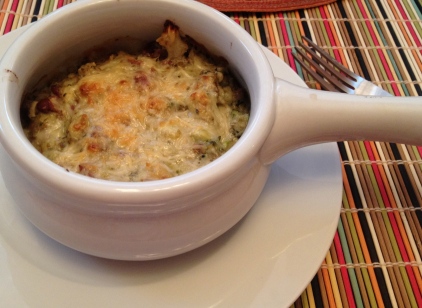 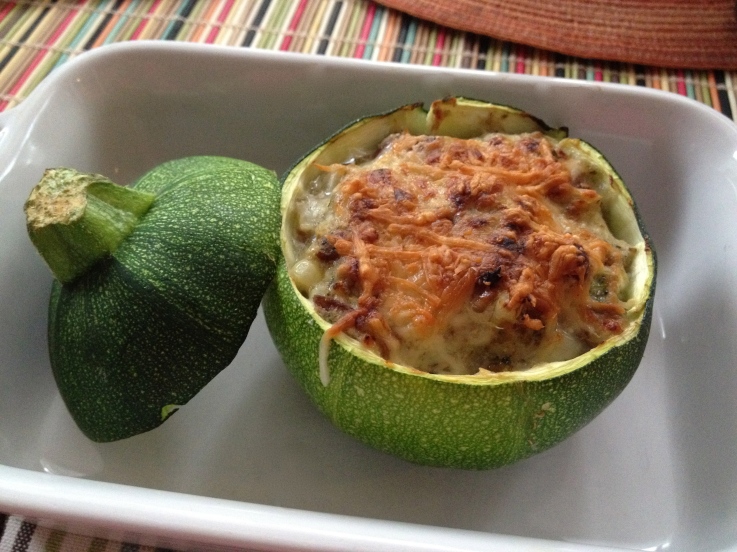 Of course, this was made with whatever I had around. You could easily keep the same basic idea without having to buy whatever I used. I mostly like that (despite the cheese) it was a fairly healthy and balanced meal. It was pretty light, which is certainly perfect during the heat wave. Although my husband was happy with the garlic flowers, he said it could have been more seasoned. I thought the pesto would take care of it but I guess it didn’t do enough. So I would suggest tasting your mixture (I have to admit that I didn’t…) before cooking it and adding salt, pepper, and herbs to your taste. My husband also end up thinking that it was a great dip (not what I had aimed for) and ate half of his portion on Triscuits.

What would you suggest as interesting ingredients next time I decide to make a stuffing?