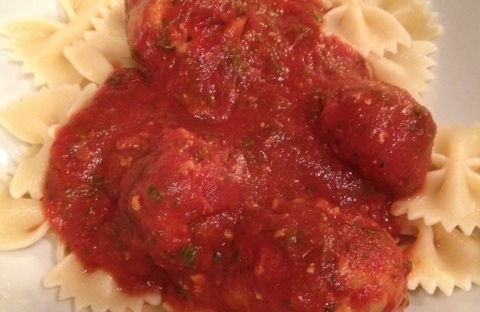 This weekend was a little bit different, cooking-wise. I used to be an Au Pair and the not-so-little-anymore girl I used to take care of was coming to spend the weekend at our house. I had not seen Fiona in a really long while so it was all very exciting. As she was going to be here overnight, I suggested we make dinner together. She is 8 so, old enough to be able to help a lot but young enough that she might not have had too much kitchen exposure yet. When I was her Au Pair, she was really sweet but ridiculously picky when it came to food. I was determined to have us cook something other than chicken nuggets or mac ‘n cheese. So I asked her what she think we should cook and she suggested meatballs. That sounded great to me! So we went off to the store to buy some ground turkey.Then we ran to the garden (we actually did run, as it looked like a big storm was coming) to grab some spinach and basil.

I always find it sad when children are not welcome in the kitchen. Of course, my little helper was 8 but I believe there are ways to have tinier hands participate as well. The best part about having them help is that it gets them more interested in the food they will eat, even if it involves….*gasp* spinach! It might sound silly but when I first told Fiona that I wanted to put spinach in the pasta sauce, she gave me a look of horror. But after helping me pick the leaves it in the garden and cut the stems on each leaves, she started to be more excited about using it in our meal. We did put it in the chopper to integrate it in the sauce without having big leafy chunks. But she had the very important job of taking all the chopped spinach out of the food processor with a spatula and blend it to perfection with the sauce. She also tore up the basil and mixed it in. She also did most of the meatball work. She thought it was cool to play with raw meat (after clear instructions on washing your hands before starting and before touching anything else) so I kept adding the ingredients and she mixed it all thoroughly. So really, while I was taking care of other (less safe) details like measuring the ingredients and cooking the pasta and the meatballs, she was still fully engaged the entire time. And I would like to add that dinner was healthier and tastier than mac ‘n cheese would have been!

– 2 handfuls of fresh spinach (chopped to taste, coarse or fine)

– Pasta of your choice

2. Shape the meatballs and cook them in a deep skillet.

3. When the meatballs are mostly cooked, add the tomato sauce, spinach, basil, and some extra salt/pepper.

4. Let simmer while cooking the pasta in a different pot.

5. Pour the sauce and meatballs over the pasta and serve!

I didn’t want to push my luck with a somewhat picky child so, although I did add the spinach, I didn’t put any other veggies but if it were just up to me, I might have added a lot more veggies in the sauce. So really, base your sauce on who your cooking for! 🙂 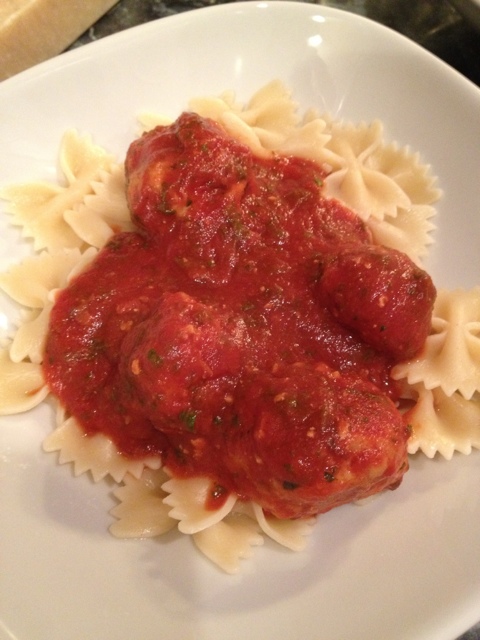 1 thought on “Cooking with a kid”