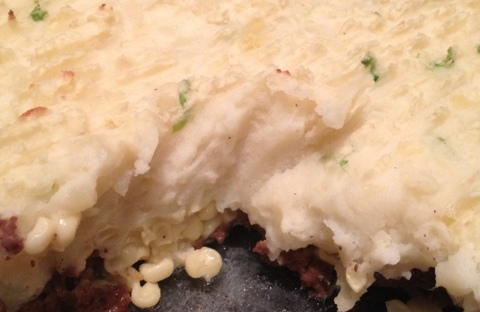 There are lots of easy Quebec dishes that I love to make once in a while. One of them is well-known in every household in Quebec: pâté chinois (Chinese pie?). And there’s nothing Chinese about it. Most of you probably know this dish as Shepard’s pie, although the ingredients would be somewhat different.

Pâté chinois consists of three simple ingredients: Ground beef, canned corn (cream, kernels, or both) and mashed potatoes. You layer the ingredients (already cooked separately) and bake them until the mashed potatoes start to be golden. It’s such a simple, cheap, and satisfying meal.

Well, last week, I had the urge to make a pâté chinois but I wanted to add a few tweaks from the very basic recipe. To my potato layer, I added spring onions. I bought the ground beef at the local market and it was flavorful enough to need no specific modifications. Then came the corn part. At first, I considered putting different vegetables with the corn. But I didn’t have anything exciting in the fridge. On the other hand, I did have 3 ears of corn. Although the recipe usually involves canned corn, I thought it would be nice to use fresh corn instead.

As I mentioned earlier, you can normally put cream or kernels. I usually prefer either a mix of both or just the creamed corn. I did have some in the pantry but I didn’t want to “waste” the flavor of the fresh corn with the canned stuff. So I decided to look up how to make your own creamed corn. I had never even thought of trying this before so it was going to be challenging enough. So I browsed a few recipes online and came up with something.

Creamed corn (how I made it but I would normally suggest using more corn, it’s just all I had on hands then)

– 3 ears of corn, kernels only

– Salt and pepper, to taste

1. Melt the butter in a medium saucepan.

2. Add the kernels and let cook a little bit while stirring constantly.

3. Add the cream, salt, and pepper and stir.

4. While stirring constantly (to prevent it from sticking), let the liquid cook off until it reaches the desired consistency.

That’s it! My only problem ended up being that my quantities were a little off when I was ready to assemble the pâté chinois. Normally, you want about the same amount of all three ingredients. I definitely didn’t have enough corn and I had way too much potatoes. But really, you cannot mess up pâté chinois. Quantities might seem wrong but it will still taste good. It’s all about the right balance that works for your taste.

3 thoughts on “Tweaks on a Quebec Classic”